Fashion designer, benefactor and collector, for many years agnès b. has supported artistic creation in all its forms, along with supporting solidarity and the environment. La Fab., the headquarters of the “Agnès Troublé dite agnès b.” endowment fund, exists to bring all these actions under one roof. It is a unique venue, opened to the public in February 2020, and located on Place Jean-Michel Basquiat, in the 13th arrondissement of Paris.

The agnès b. art collection La Galerie du Jour, which opened in 1984, is now part of La Fab.! This is an art gallery, a place where everything is for sale: the paintings, sculptures and photographs, and also the furniture (in partnership with Knoll).

“I wanted to create a gallery to enable what I love to be seen,” explains agnès b. “We call it a gallery, but it is also a place to show the back and the side of things, to show painting, sculpture, photos and, every time and at the same time, to try to invent new ways of circulating images, to make them accessible to everyone.”

La Fab. includes the Librarie du Jour bookshop. This art bookshop exclusively offers publications created by Galerie du Jour as well as a selection of literary and artistic works and a series of products inspired by the exhibitions. Social and solidarity actions carried out by the endowment fund

Le Point d'Ironie, a periodical created by Agnès, Christian Boltanski and Hans Ulrich Obrist in 1997, is distributed free of charge by La Fab. 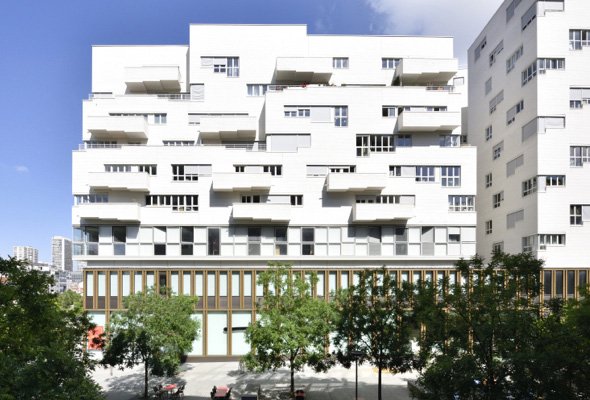 THE ANONYMOUS PROJECT
"This is England"

The Anonymous Project is proud to present “This Is England,” a voyage through the British part of the collection through slides taken by amateur photographers. Red brick houses, the sacrosanct tea-time, picnics at the roadside, football matches in the park, fish & chips, days at the seaside and a good pint of beer on a summer's day... These are all the things that make the English so different, so unique. The exhibition is organised in partnership with Polka Galerie.

Since the end of lockdown, the term “new normal” has been regularly used to describe the reality of the world in the light of Covid-19 — a “new” life marked by precautions, preventative measures and habits that seem to have modified our behaviour and eroded the proximity and sociability that is so characteristic of human beings. Again, Massimo Vitali went to the beach to observe this new normal. And once again, this densely populated place, one of his favourite subjects, turned out to be strangely normal. The desire to be outside, see one's friends, enjoy the sun and the sea, jump into the water and leave behind all the worries of the week: all this is still there. Agnès and Jean-René de Fleurieu inaugurate “la Galerie du Jour,” just a few paces from agnès b. at Rue du Jour which opened in 1975 near to the famous “Les Halles” in Paris. In the same venue “la librairie Christian Bourgois” is created, where all the books are laid flat on one table. This table, which belonged to the former residents of the building, Jambons Français, would later be installed in the heart of the Librarie du Jour The curator Jean Fournier calls Agnès and says, “Shouldn't you take over my gallery?” They had been friends since Agnès did an internship at his gallery on Avenue Kléber at the age of 17. La Galerie du Jour therefore moved to Rue Quincampoix. During a dinner, agnès b., the artist Christian Boltanski, and the exhibition curator Hans Ulrich Obrist, come up with the idea of “le Point d’Ironie.” This “hybrid periodical” would offer an artist the possibility to fully use the medium to create a unique work of art. The first edition of le Point d'Ironie was published for the 1997 Cannes Festival. A real manifesto for independent cinema, it is designed by Jonas Mekas, who passed away in 2019. Free, distributed all over the world and produced personally by Agnès, today more than 60 editions of le Point d'Ironie have been published. Creation of the “Agnès Troublé dite agnès b.” fund following the passing of the Law 2008-776 of 4 August 2008 on the modernisation of the economy, with the goal of structuring sponsorship, partnership and philanthropy actions that she has personally supported for nearly 30 years. It is one of the first funds of this kind to be created in France. Always looking for new venues, after an initial meeting with Jérôme Coumet, the mayor of the 13th arrondissement, agnès b. decides to set up her new venue, La Fab., in Place Jean-Michel Basquiat. La Fab. extends over 1400 m2, in a new building that includes social housing, and was designed by SOA Architectes. The building is located in an up and coming area, both culturally and architecturally. A new young Paris with a bright future! La Galerie du Jour and la Librairie du Jour become itinerant, launching an “outside the walls” program while construction is being made at La Fab. In this context, two exhibitions featuring the artists Carolyn Carlson and Elizabeth Daynes are organised at agnès b.'s headquarters at Rue Dieu in Paris, as well as an exhibition presenting responses to photographs in Agnès' collection by students of France's leading culinary arts school: “Modernités des passions, un regard des étudiants de l’ENSP sur la photographie dans la collection d’agnès b.,” presented for the event Rencontres d’Arles 2019. La Fab. opens, bringing together agnès b.'s collection, la Galerie du Jour and la Librairie du Jour. For its opening, La Fab. presents an exhibition of the collection on the theme of audacity, of which Agnès is the curator, alongside her team from the Galerie du Jour.